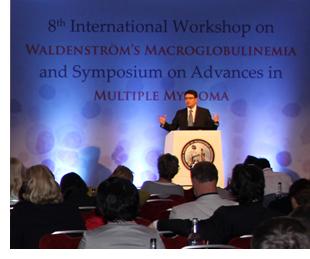 August 15, 2014: Dr. Jorge Castillo, Bing Center for Waldenstrom’s Macroglobulinemia presented his latest analysis of survival trends in WM at the 8th International Workshop on WM and Symposium on Multiple Myeloma (IWWM-8). His findings were as follows: Based on current knowledge, it was unclear if the prognosis of patients with Waldenström’s Macroglobulinemia was improving. Two recent studies from Europe provided disparate results. On one hand, a Greek study showed that the outcomes of patients with Waldenström’s had not improved in the last decade despite of the advent of novel therapies such as rituximab and bortezomib. On the other hand, a larger Swedish study showed the survival of patients with Waldenström’s had improved in the last decade. Inspired on this apparent discrepancy, Bing Center investigators conducted the largest population-based study to date to identify survival trends in patients with Waldenström’s within the United States. The results of this study have been recently released in Blood, the journal of the American Society of Hematology.

Using the Surveillance, Epidemiology and End Results (SEER) database, Bing Center investigators identified a cohort of over 6,000 Waldenström’s patients diagnosed between 1980 and 2000. The patients were divided according to the year of diagnosis. We also evaluated the 5-year relative survival in patients diagnosed in recent years. Relative survival measures the survival of individuals in comparison with the survival of otherwise healthy individuals in the same country and of the same age, sex and race. The initial finding was that the 5-year relative survival of Waldenström’s patients have progressively improved over the years with the highest rates seen in the last decade (2001 and onward). These results are encouraging and indicate the use of novel drugs, better supportive therapy and increased patients, family and clinicians’ knowledge about this disease might have potentially impacted favorably on the survival rates.

Next, we wanted to identify specific groups of Waldenström’s patients who might have not derived survival benefit in the last decade. The identification of such high-risk groups would help us design and personalize our treatments. We studied different age groups (20-39, 40-59, 60-79 and 80+ years), sex (men and women) and race (whites, blacks, other). We also evaluated patients who had bone marrow disease only versus patients with disease outside of the bone marrow (extramedullary), patients according to diagnoses of lymphoplasmacytic lymphoma versus Waldenström’s, and finally according to the United States region (Northeast, South, Midwest and West). Our study showed that most of these groups had a better survival in the last decade with exception of blacks. The reasons for this disparity are poorly understood but certainly in need of further research.

The full Blood magazine publication can be viewed or downloaded here: Survival Trends in Waldenstrom macroglobulinemia: an analysis of the Surveillance, Epidemiology and End Results database.