Scientists from the Bing Center for WM published two highly impactful articles in the journal BLOOD, including a Plenary Contribution led by Zachary Hunter and an Original Contribution led by Steve Treon that describe the identification of highly prevalent mutations in the CXCR4 gene. Mutations found in the CXCR4 gene represent the second most common mutations after MYD88 L265P that was previously reported by the Bing Center in the New England Journal of Medicine in 2012 in over 90% of patients with WM.

Mutations in CXCR4 are the first to be described for any cancer in WM patients. The presence and type of CXCR4 mutation impacts disease presentation in WM patients. Patients who have CXCR4 non-sense mutations tend to present with more aggressive disease including greater bone marrow involvement, serum IgM secretion, and symptomatic disease including hyperviscosity crisis at presentation. The functional relevance of non-sense mutations was recently addressed by Dr. Yang Cao from the Bing Center who presented a poster at the American Society of Hematology in 2012, and then in 2013 modeling the impact of the S338X CXCR4 non-sense mutation in WM cells. Using a lentiviral transfection system to place the mutated gene in WM cells, she showed that the S338X mutation caused cells to show enhanced survival in the presence of ibrutinib, an inhibitor of Bruton’s Tyrosine Kinase. Enhanced survival and resistance to ibrutinib accompanied increased phospho-AKT and phospho-ERK signaling in response to SDF-1a in S338X CXCR4 mutated cells. Both AKT and ERK are major survival factors for malignant B-cell lymphomas. 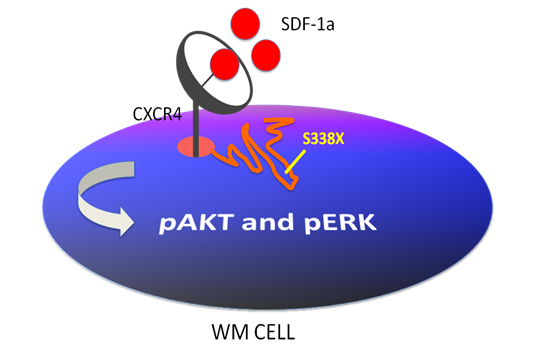 From a translational view point, these finding of CXCR4 mutations are important since inhibitors for CXCR4 signaling are either approved by the FDA (plerixafor) or currently in clinical trials. Despite the more aggressive presentation associated with CXCR4 mutations, the presence of CXCR4 mutations did not impact survival, whereas having wild-type (no L265P) MYD88 mutation was associated with decreased survival. The reported findings from these studies have important implications for the individualized care of patients with WM based on their MYD88 L265P and CXCR4 mutational status, and provide a paradigm of how sequencing MYD88 and CXCR4 can provide clinically meaningful information for directing WM care. These studies also highlight the need to better understand and improve treatment for patients without the MYD88 L265P mutation (wild-type). The studies were funded by Dr. Peter Bing, the International Waldenström’s Macroglobulinemia Foundation, the Coyote Fund for WM, the D’Amato Family Fund for Genomic Discovery, and the Edward and Linda Nelson Fund for WM Research.