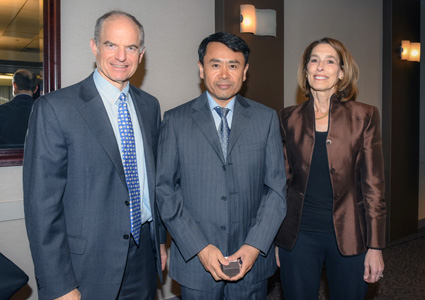 Dr. Guang Yang was honored with a 15 Year Service Award in recognition of his service to the Dana Farber Cancer Institute (DFCI) at a ceremony attended by Laurie Glimcher, President of DFCI, and Joshua Bekenstein, Chair of the Board of Directors of the DFCI. Dr. Yang is a Research Scientist at Dana-Farber, and an Instructor of Medicine at Harvard Medical School. In 2001 following graduation with a Ph.D. degree from Cancer Institute/Hospital of Chinese Academy of Medical Sciences (CAMS) & Peking Union Medical College (PUMC) in Beijing, China he joined the DFCI. In China, Dr. Yang was an Associate Professor of Histology and Cell biology and taught both graduate and medical students. He also performed research studies in cancer at the Dalian Medical School, China. In 1996, he received the China Medical Board (CMB) award by the Rockefeller Foundation and started a formal career in cancer research at the Cancer Institute at CAMS and PUMC. 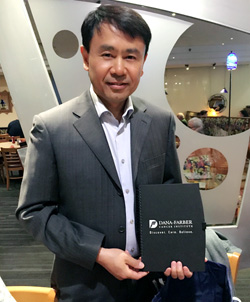 When Dr. Yang arrived at the DFCI, he focused his work on understanding the regulatory mechanisms of alternative splicing during gene expression in the laboratory of Dr. Edward Benz, President of the DFCI (2000-2016). In 2008, he became a Research Fellow in the Bing Center for Waldenstrom’s Macroglobulinemia (WM). His first project in the Bing Center was to examine the mechanism of IgM flare in WM patients following Rituximab or IVIG treatment. He succeeded in showing that the IgM flare was due to a bystander effect by immune cells that responded to binding to Rituximab and IVIG treatment. Dr. Yang was also a key member of the team that discovered and characterized MYD88 and CXCR4 mutations in WM. He showed that the MYD88 mutation which is found in 95% of WM patients triggered pro-survival NF-κB signaling, and that blockade of MYD88 signaling inhibited NF-kB activation in WM cell. Following this discovery, he showed that both Bruton Tyrosine Kinase (BTK) and Hematopoietic Cell Kinase (HCK) were downstream targets of mutated MYD88 signaling, and that pro-survival NF-kB signaling was triggered by both BTK and IRAK1/IRAK4, while HCK triggered pro-survival BTK, PI3K/AKT and MAPK/ERK signaling. These findings were published in prestigious peer reviewed journals (New England Journal of Medicine, Blood) and were essential in supporting a clinical trial with ibrutinib that blocks both BTK and HCK. This trial received the first-ever FDA “breakthrough designation” for an oncology indication, and subsequent FDA, EMA, and Health Canada approval of ibrutinib for the treatment of WM. The importance of HCK as a downstream mediator of MYD88 survival signaling in B-cell lymphomas including WM and ABC subtype of the DLBCL aggressive lymphoma was shown by Dr. Yang who is collaborating with Dr. Nathanael Gray’s group at Harvard Medical School to develop more potent HCK inhibitors. 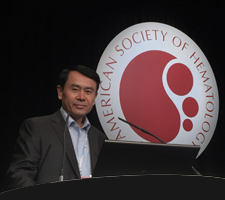 Dr. Yang was also pivotal in helping to define survival signaling, and drug resistance (including to ibrutinib) mediated by CXCR4 mutations that are found in up to 40% of WM patients. His findings were published in the British Journal of Hematology, and were validated in a prospective study of ibrutinib in WM patients that was published in the New England Journal of Medicine. A clinical trial examining the CXCR4 blocking antibody ulocuplumab with ibrutinib in CXCR4 mutated WM patients was made possible by Dr. Yang’s efforts, and will be starting in Summer of 2017. 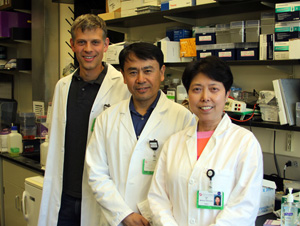 In addition to MYD88 and CXCR4 signaling, Dr. Yang helped clarify the importance of over-expression of the BCL-2 gene in WM cells, and showed a synergistic effect between the BCL-2 inhibitor venetoclax (ABT-199) and ibrutinib. These findings published in the British Journal of Hematology supported the initiation of a clinical trial with venetoclax in previously treated WM patients.