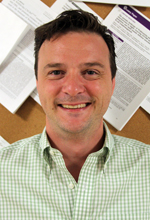 Phone: 617-632-6285
Email: This email address is being protected from spambots. You need JavaScript enabled to view it.

Chris Patterson is the Administrative Director of the Bing Center for Waldenstrom’s Macroglobulinemia. After completing his undergraduate studies at Kings College, and the University of Heidelberg in Germany, Chris studied immunology and biochemistry at the Harvard University Extension School, Cambridge MA. In 2005, Chris joined the Bing Center as a Clinical Research Coordinator and was responsible for clinical trials examining the role of sildenafil, imatinib mesylate, and bortezomib in the treatment of Waldenstrom’s Macroglobulinemia. In 2007, he undertook the role of Administrative Director for the Bing Center, and led the expansion of the Bing Center Basic Science and Clinical Trial Efforts. In 2008, Chris served as the Secretariat of the highly successful 5th International Workshop on Waldenstrom’s Macroglobulinemia which took place in Stockholm, Sweden and attracted senior and young investigators from around the world for a 4 day scientific workshop on WM. For his efforts, Chris was honored at the closing ceremonies, which took part in the Nobel Hall. In 2009, Chris organized the 3rd International Summit on WM, which brought over 600 patients and physicians to Boston for a 3-day Summit on WM. In addition to his administrative roles, Chris has been a strong advocate for WM patient education, and is also the coordinator for the New England WM Support Group. He has organized numerous regional WM support group meetings throughout North America and Europe, including the 2009 Toronto Summit on WM. Among his research interests, Chris undertook studies addressing cholesterol and iron deficiency in WM, as well as characterizing the familial basis of WM. He has served as a co-investigator for the Familial WM Program, which is funded by the International Waldenstrom’s Macroglobulinemia Foundation and has attracted hundreds of patients and their family members for comprehensive studies addressing the genetic basis of Familial WM. His studies have also identified Hepcidin as a mediator of iron deficiency in WM. He has been a co-author for numerous papers and abstracts published in WM, including those published in Blood, Clinical Cancer Research, Clinical Lymphoma Myeloma and the Journal of Clinical Oncology, and has presented at national meetings including the American Society of Hematology and the American Society for Clinical Oncology. He also served as a co-editor for a Special Edition on WM which was published in 2009 in Clinical Lymphoma Myeloma.